Three tools with the same purpose: to create a straight line for the first length of wallpaper or the one after an internal corner, respectively. The spirit level is the classic amongst those tools; it is easy to use and almost every household has one. The plumb bob is one of the oldest ways of creating a dead straight line (also known as "plumbing"). The chalk line/chalk box is a more modern variation of the theme.

Which one of theses three measuring devices is favoured is purely down to individual preferences. Plumb bob and chalk box require a bit of practice and patience in the beginning. For plumb lines on ceilings, the chalk box is the best device. Chalk boxes are only suitable for vertical lines. Spirit levels are extremely easy to use, which is why they are most frequently used for plumb lines along walls.

Spirit levels - variations and use

Spirit levels are an indispensable tool in many trades and can be used as a measuring device for the vertical and horizontal alignment of spaces, surfaces or objects. The basic structure is the same for all models. Spirit levels have a rectangular, elongated casing made of aluminium or plastic which often comes with a measuring scale (in centimetres and millimetres). This useful addition means that it can also be used as a ruler. In terms of colour, the casing is usually red, yellow or aluminium-grey. The main part is the encased bubble level which is aligned with the measuring area. It is sometimes called "the eye", "the vial", or simply "the bubble" and it moves around in liquid. Special line marks to the left and right of the encased bubble show whether the alignment is perpendicular or not.

Spirit levels are available in many different sizes and lengths. They can be between 10 cm to 200 cm long. Whilst mini spirit levels are often used for small and hard-to-reach parts and narrow areas, the larger ones (over 100 cm) are mostly designed for professional construction purposes. The number of encased vials, as well as their position, can also differ (depending on their actual use). For instance, in some models, various measuring vials are positioned vertically and horizontally in the casing. For normal DIY purposes, especially wallpapering, a spirit level with one vertical and horizontal bubble is sufficient. A measuring scale is a useful extra. For straight lines, the length of the spirit level should be about 50 cm or a bit more. At a cost of about £15 for "household" spirit levels, this is a relatively inexpensive investment, especially as this measuring tool has a variety of uses.

A dead straight line is essential for the first length of wallpaper, or the one after an internal corner. The width of the wallpaper is measured and marked on the wall with a ruler or the spirit level. A small pencil mark at the upper wall section should do the trick. The spirit level is then vertically aligned with the pencil mark and a line is drawn along the spirit level. It is then positioned at the end of the line whilst closely watching the bubble. If is is positioned in the middle, the alignment is perfect. The drawn line is then continued. This process is repeated until the bottom end is reached. The same process is applied to the ceiling.

Plumb bobs - variations and use

Plum bobs are characterised by a metal cone which is used as the weight. At the upper end, there is an eyelet to thread through a thin piece of string which is used to create straight vertical lines. Plumb bob and string can be bought separately or in a handy set (usually with tear-proof nylon string). Plumb bobs come in various sizes and weights. As a tool for wallpapering, 80 grammes are sufficient; the string should be around 5 meters. 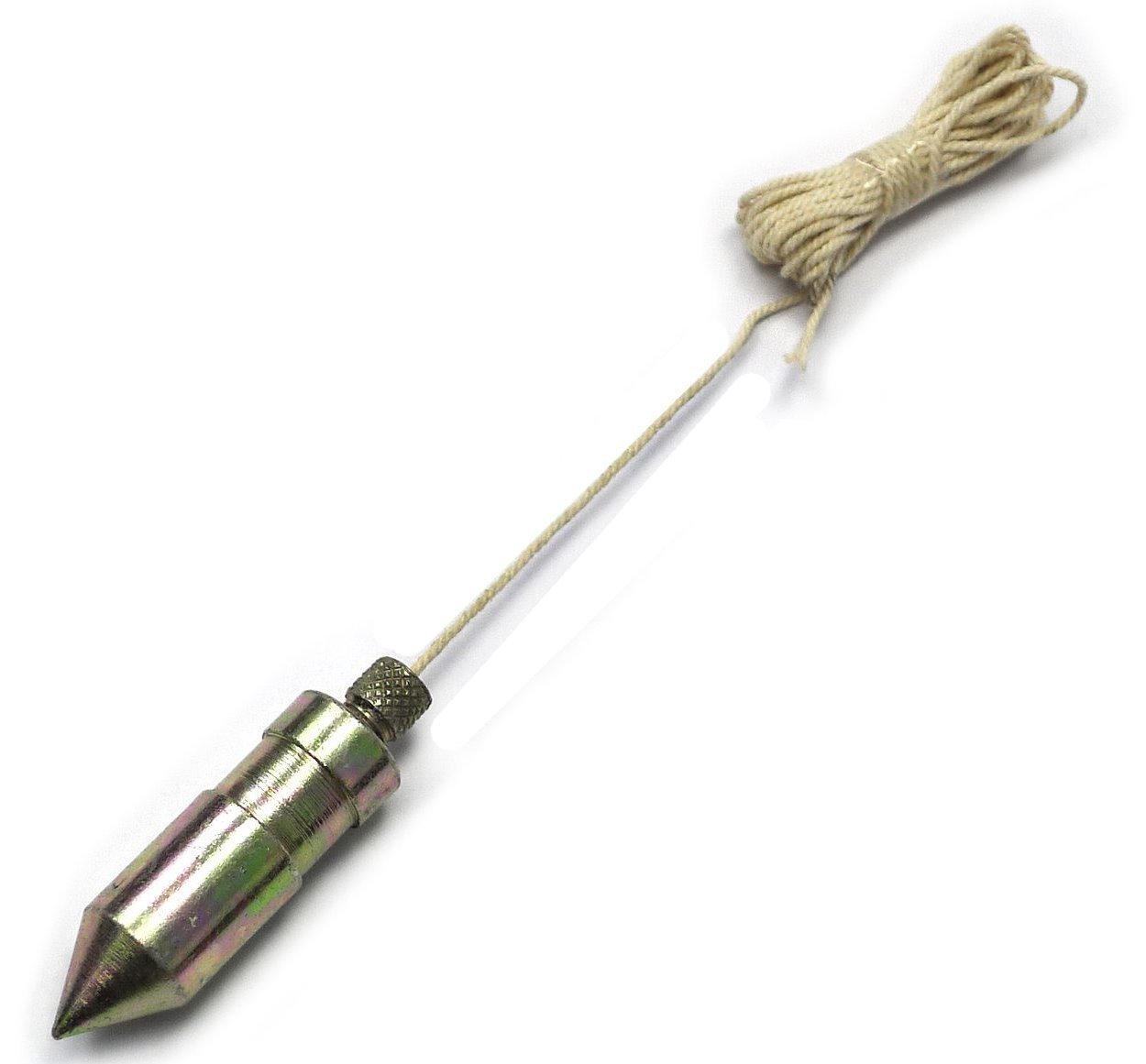 Plum bobs with automatic string retrieval are heavier and can weigh up to 400 g; the fixing needle on the string casing is used to attach the device to the wall. Prices for this tool range between £4 and £20, depending on the design. 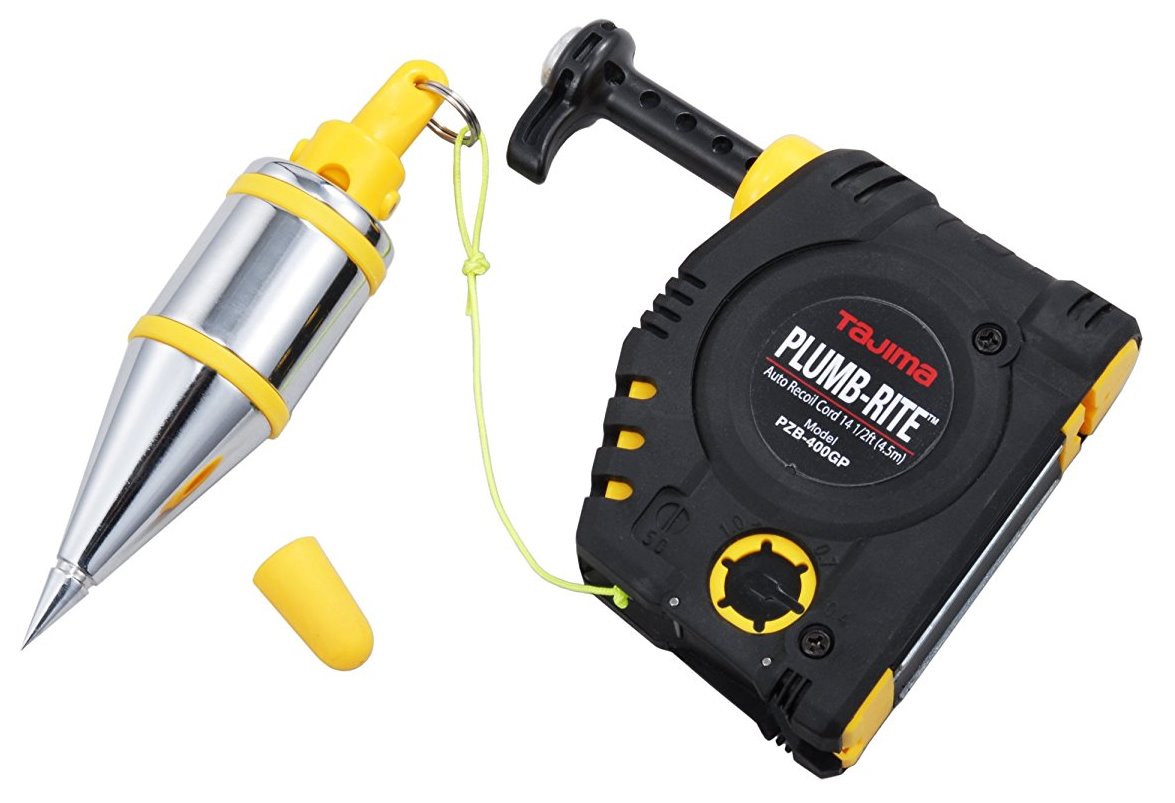 The plumb bob is considered to be one of the oldest measuring tools for plumbing - it was used as far back as ancient Egypt, to build the pyramids. Many tradesmen carry it, and especially the older generations often learnt how to use it during their apprenticeship years. The plumbing bob makes use of gravity. It works similarly to a pendulum.

A simple plumbing bob with a string but without automatic retrieval is sufficient for wallpapering. The string and weight are attached to a nail about 50 cm (i.e. the standard width of a strip of wallpaper minus 2-3 cm) from the internal corner and it is left to swing until it creates a straight line. In order to pencil along this line in a perfectly straight way and to prevent the pencil from slipping, it is useful if one person can hold the weight whilst the other one draws the first line for the wallpaper. An even easier option is to put coloured chalk powder onto the string itself and to then carefully press it against the wall.

Chalk lines/boxes - variations and use

A chalk box is a handy tool for drawing straight lines onto various surfaces. Also known as "marker line", it is a modern alternative to the plumb bob. It consists of a shock-resistant, conical plastic or aluminium casing which contains some string as well as a small container that is filled with coloured chalk powder. The casing works as a weight for creating vertical lines on walls; some high-quality models also feature a piece of metal for this purpose. 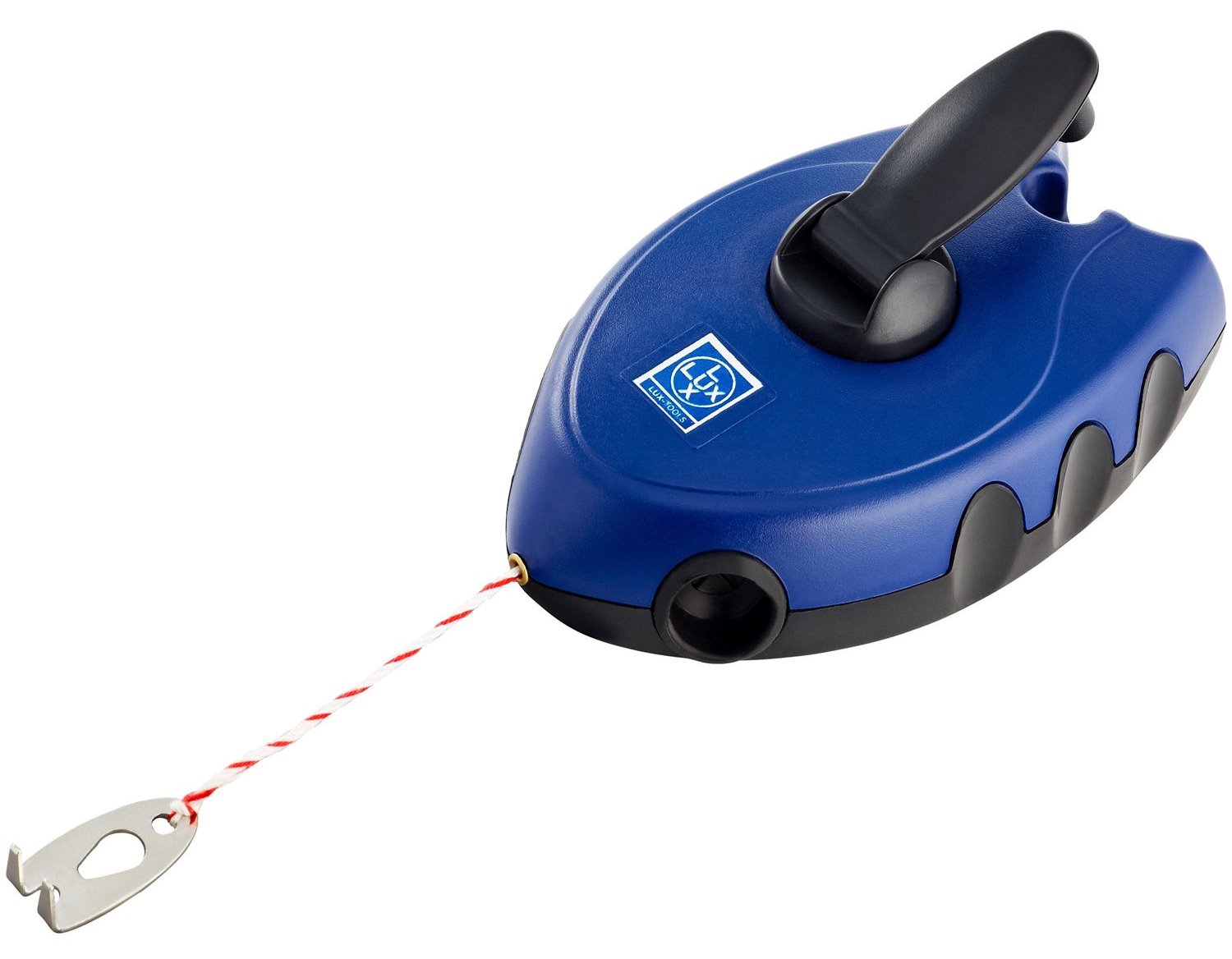 The hook-eye attached to the end of the string is used to hang the contraption on a nail on the wall or ceiling. It can be manually unwound and pulled back either automatically or with a crank handle, depending on the chosen model. Before use, the chalk powder, which comes in small bottles and in various colours (blue, green, red and yellow, for instance), is filled into the small container in the device. The coloured chalk can be purchased separately, but is usually included in the chalk box set. When un- and re-winding the string, it is then automatically covered with the chalk. The string is usually made of a cotton-polyester-mix to which the chalk sticks very well. The size of the casing,weight and length of string can vary, depending on the favoured model. Simple chalk boxes with a manual retrieval function, plastic casing and strings of up to 30 m length are available at between £5 and £10. Even inexpensive variations often come with a small attachable vial (like in spirit levels).

The contraption is attached to the ceiling about 50 cm (i.e. the standard width of a strip of wallpaper minus 2-3 cm) from the internal corner; the string is then pulled out of the casing down to the bottom of the wall and pulled tightly. It is then slightly pulled away from the wall and released. The chalk will leave a straight line on the wall. Chalk boxes are also very useful for ceilings as they can be used along the entire area.